That was the lead sentence of the story I filed later that night with The Sheffield Post.  My editor spiked it, saying, “Nobody who reads this newspaper knows who Hieronymus Bosch is.”

Instead, the story began, “Six people were found brutally murdered, their nude bodies mutilated, in the exclusive, gated Sheffield community of Connor’s Landing.”

In RANDOM ROAD, six, naked bodies, hacked to pieces, are found in an exclusive, gated Connecticut community.  For Geneva Chase, a journalist on the edge of alcoholism, this story is the last chance to redeem herself.  She’s lost every other major news job she’s had and, for Genie, working at her hometown newspaper is the end of the line.  There’s nowhere else to go.

But she has to work through the distractions of the married man she’s seeing and the love affair she starts with an old high school sweetheart, a single father facing a life and death challenge.

Genie’s journey races along a course that includes a gang of professional thieves, a blind artist, a ghost hunt and a sex club. She’s in a desperate race to get the story ahead of her competition.  But can she keep her drinking under control and do her job well enough to keep from getting fired, finish the story and not get killed in the process?

RANDOM ROAD is not only an adult murder mystery, but it’s also a love story with a shocking twist at the end that asks- Do things happen for a reason or is it all random? 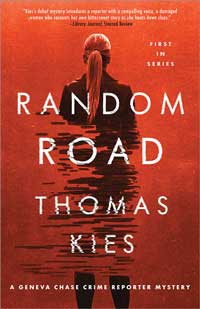 ...Kies' fiction debut lays the groundwork for an entertaining series.

Reporter Geneva Chase has written hundreds of stories, but what brings her back to Sheffield, CT, and her hometown newspaper, isn't a news piece, it's her alcoholism. Yet this may be her chance at professional redemption, as she investigates one of the most grisly murder scenes of her career. Probing the brutal slaughter of six people at an exclusive gated community, the intrepid journalist also uncovers all kinds of secrets, from a young man whose father bribes a judge to let him off on a hit-and-run charge to a swingers' club. At the same time, Geneva also tries to hide her drinking problem from the newsroom. A chance encounter at an alcoholics anonymous meeting will change her life, but not before it's jeopardized by her connecting the dots and tracking down a vicious killer. VERDICT Kies's debut mystery introduces a reporter with a compelling voice, a damaged woman who recounts her own bittersweet story as she hunts down clues. This suspenseful story will appeal to readers who enjoy hard-nosed investigative reporters such as Brad Parks's Carter Ross.

First in a new mystery series about a failing news writer who exposes enormous inequities between community haves and havenots, and the chaos, malice, and moral disconnect of social privilege and power. Kies tells a taut, fastpaced tale, imbuing each character with memorable, compelling traits that help readers connect with them. ...those who enjoy J. A. Jance's Beaumont series or Sue Grafton's Kinsey Millhone mysteries will appreciate Geneva Chase.

It's a crime scene straight out of a nightmare, six bodies found naked and cut to ribbons. Reporter Geneva Chase works for a small town paper on the verge of folding, and she's just inches away from ending her career in shame. An alcoholic who has blown more stories than she's published, this may be her last chance to save her dying career. When her story is picked up by the AP, Geneva believes she may actually have a chance of resurrecting her career and her life. Now is she can just stay away from the booze and her married lover and not piss off a killer, she might just get a second chance. Gritty, snarky and scary.

For the Love of Books

The bad choices made by Geneva “Genie” Chase, the narrator of Kies’s arresting debut, have landed her back in her hometown of Sheffield, Conn., working for the local paper. When a multiple murder—the six victims were all members of a sex club, and the murder site was their clubhouse—is discovered in a Long Island Sound mansion, Geneva is the only reporter on the scene. This, Genie realizes, is the story that could revive her career if she can get past her two major stumbling blocks: vodka tonics and bad taste in men. Her court-ordered attendance at an AA meeting reunites Genie with Kevin Bell, a high school friend with his own problems. While trying to figure out what Kevin means to her now, Genie is still entangled with a married lawyer reluctant to end their affair. Meanwhile, hunting for two killers in a wealthy community soon puts Genie at odds with the police and people with secrets to hide. While the sheer number of troubled characters and events taking place in a short time span weighs down the plot, Kies has created a likable if flawed heroine readers will want to see more of.