Random Road introduced Geneva Chase―"a reporter with a compelling voice, a damaged woman who recounts her own bittersweet story as she hunts down clues," says Library Journal―to murders straight out of a nightmare―six bodies found naked and cut to ribbons in a posh Connecticut home.

Having survived this and a personal tragedy, Geneva's story still includes alcoholism and career challenges compounded by the rocky finances of her newspaper employer. But she's working. She's fighting the urge to reconnect with a magnetic yet married lover. And she's raising a rebellious young lady who is not her daughter but a cherished legacy.

Nevertheless, the newshound in Geneva spurs her to bad if not downright dangerous choices as two unrelated crimes unexpectedly collide. A fifteen-year-old girl at her ward's high school has vanished along with her English teacher. Is this same-old, same-old, or something more? And then there's the abused woman who torched her sadistic husband, and how to keep her out of the clutches of powerful mobsters―and thus, out of the news.

Out on the crime beat, Geneva works to unravel the connection, if any, between these two disparate stories while her newspaper is put up for sale, a high-flying Hollywood production lights up the town, and her personal battles accelerate. Jarring twists and turns include charming movie stars, treacherous diamond merchants, adultery, sex traffickers, and murder. While the clock ticks and Geneva works desperately to find the missing student, she comes to the horrible realization that she's in over her head.

DARKNESS LANE, the second novel in the Geneva Chase Mystery Series, hurtles along at a breakneck speed where nothing is what it seems, and where art and reality collide in a terrifying climax. 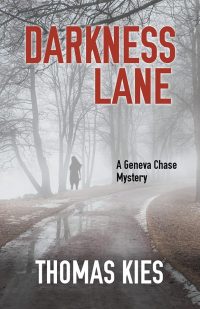 Newspaper reporter Geneva Chase keeps vodka in her panty drawer, doesn’t turn down a visiting film star when he attempts to bed her, and knows a good lead when it’s dropped on her: a woman who sets her abusive husband afire and sips Merlot as he burns, observing, “I’m just toasting my husband.” Who could resist that? Not Geneva. But author Kies isn’t after just raffishness here. Geneva is struggling to conquer alcoholism and really struggling to care for teenage Caroline, the daughter of Geneva’s fiancé, who “died before he should have.” The plot begins when Caroline’s classmate disappears, and as Geneva covers the search for her, she comes across links to the toasted husband. There’s a solid thriller here—the key is sex trafficking—but the real pleasure is watching Geneva work. Cheer her onas she wrestles with that vodka bottle and trembles with fear as she confronts the monster behind the child-slavery ring. She’s also pretty good at standing up to a newspaper publisher about to screw the help into the ground.

Journalist Geneva Chase, the flawed narrator of Kies’s entertaining sequel to 2017’s Random Road, once did stints at the nation’s top news organizations, but has worked her way down the career ladder to the point where she’s now an editor and crime reporter at the local paper in Sheffield, Conn., her hometown. The crime beat pulls her into two stories that at first seem straightforward but turn out to be quite complex. One of them involves the murder of a low-level thug by his abused wife; the other focuses on the disappearance of beautiful 15-year-old aspiring actress Bobbi Jarvis. The connection between the two stories keeps the plot humming. Chase’s life is further complicated by being the legal guardian of 15-year-old Caroline Bell (Bobbi’s best friend), by the potential loss of her job if her newspaper is sold, and by the struggle to control her drinking. Kies neatly balances breathless action with Chase’s introspection and sleuthing savvy.

A pair of complex cases confounds a dogged crime reporter and unsettles the small Connecticut town where she lives. When Betsy Caviness douses her dead-drunk husband, Jim, in gasoline and sets him on fire, recovering alcoholic Geneva Chase, who edits Sheffield’s newspaper, feels more pity for the abused perp than the victim, who’d recently been arrested for trafficking minors for sex. Betsy’s million-dollar bail is posted by a group called FOL, which stands for “Friends of Lydia,” whose members freely acknowledge their secrecy, piquing Geneva’s interest even more. Meanwhile, she’s disturbed by the disappearance of Bobbi Jarvis, a high school sophomore who’s the best friend of her ward, Caroline. Caroline’s father, Kevin, who died tragically, was Geneva’s lover (Random Road, 2017). What makes Bobbi’s disappearance even more puzzling is that she’d recently been cast in a production with New York aspirations. At a local gas station, police discover closed-circuit video that shows Bobbi getting into a car owned by Jacob Addison, the school’s drama club coach. Bobbi’s parents are estranged, and the gambling addiction of her bisexual dad, Adam, has recently created serious financial problems. When Geneva tracks him down at his apartment, she makes a gruesome discovery. Could these two crimes possibly be connected? Multiple murders and shocking twists are key components in Geneva’s ultimate uncovering of the truth. The flawed but dedicated heroine anchors Kies’ second mystery with a compassion that compels readers to root for both justice and redemption.